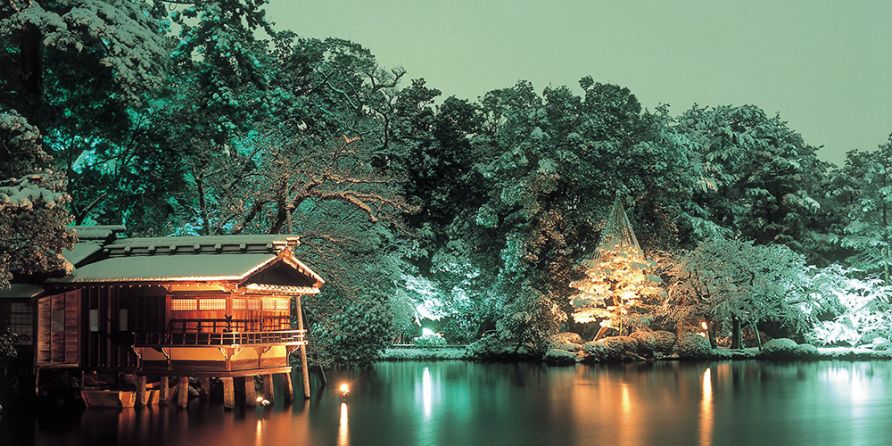 Kanazawa is a must stop on any visit to Japan. This compact city, centred around its prestige castle is truly proud of its Samurai culture and presents an uncrowded town filled with fine arts, onsens, traditional Noh music, geishas, refined dining and exquisite gardens.

Easy to get to and easy to get around, Kanazawa is more affordable and authentic than other areas of Japan. Its fascinating history, has evolved a culture of intricate arts and charming, courteous, resourceful and hospitable people. For the best experience, we recommend 2-3 nights in Kanazawa.

Getting to and around Kanazawa

Take a look at the history and culture of Ishikawa Prefecture, and you will discover deep roots to the Maeda Clan, the ruling family of the Kaga Domain during the Edo Period (1603-1868). At the time, the Maeda Clan was often referred to as Kaga Hyakumangoku (Hyakumangoku literally means “one million koku of rice”, where koku was the amount of rice that would feed one person for one year; this symbolized the wealth of Kaga at a time when wealth was calculated by the amount of rice one’s domain was able to produce). Because the Maeda Clan was not related to the ruling Tokugawa Clan and their domain (Kaga) was the richest domain after the capital (Edo), they were always under careful watch by the Shogunate. In order to show that their clan had no military ambitions and no desire for taking over the country, the lords of the Maeda Clan refrained from displays of military strength, thereby appeasing the government in Edo. In particular, the third clan lord, Toshitsune Maeda, very publicly implemented policies to encourage the development of culture in the domain.

The Maeda Clan worked hard to develop Kanazawa and the castle town area, and they committed considerable resources into arts and crafts by building workshops for famous and highly-skilled artisans they had called from Kyoto and Edo. This promotion of culture was actually also a way for the Kaga Domain to show the ruling Shogunate in Edo that they were not interested in rebelling against the government. That formed the foundation for a vibrant tea ceremony and Noh drama culture which flourishes even today. In turn, a variety of arts and crafts (such as Kanazawa gold leaf art, Kanazawa lacquerware, Kaga Yuzen silk dyeing, and Kutaniyaki ceramics) were developed to create the wares and tools necessary for tea ceremony and Noh drama. Ten of those traditional arts and crafts have been designated National Traditional Arts and Crafts, which is the most of any prefecture after Kyoto.

During the Edo Period (1603-1868), the Maeda Clan, who were the ruling clan lords of the Kaga Domain (present-day Ishikawa Prefecture), greatly encouraged academic learning and cultural arts, even spreading them to commoners. As a result, tea ceremony and Noh music flourished in the region and many arts and crafts were born. Countless master craftsmen and artisans have been fostered here, which in turn led to the opening of various exhibitions all around the prefecture to showcase their works.